Sometimes I struggle to decide what the blog should be for the month. I look back at what I have written in the past. I think about what questions I get or articles I read. This month I decided to share some photos of my life and the dogs that have been a part of my years. I have to ask for your candor as I look back on some of these photos and chuckle at the clothing and hair styles of the past. Remembering each of these pets in the photos certainly brings back many smiles and fond memories. As I have mentioned before, I grew up on a farm in Northern Iowa. We had dog(s), cat(s), horse(s), and pigs. As with many people during that time in the 60’s and 70’s the animals were outdoors. We loved them and spent many hours with them during the years but they did not get fancy food or preventative veterinary care. Spay and neuter practices were not common and every spring a new batch of babies would arrive.

The first dog my parents had was named Fido. Fido was the best dog and she was helpful on the farm with the livestock and also kept the wild critters away. I was very young and did not remember a lot about her but she did give us the first puppies that I recall. When the puppies were ready to be weaned, we hid the puppies hoping that we could keep all of them. Of course Dad found them since it is difficult to keep puppies quiet and they all went to their new homes. 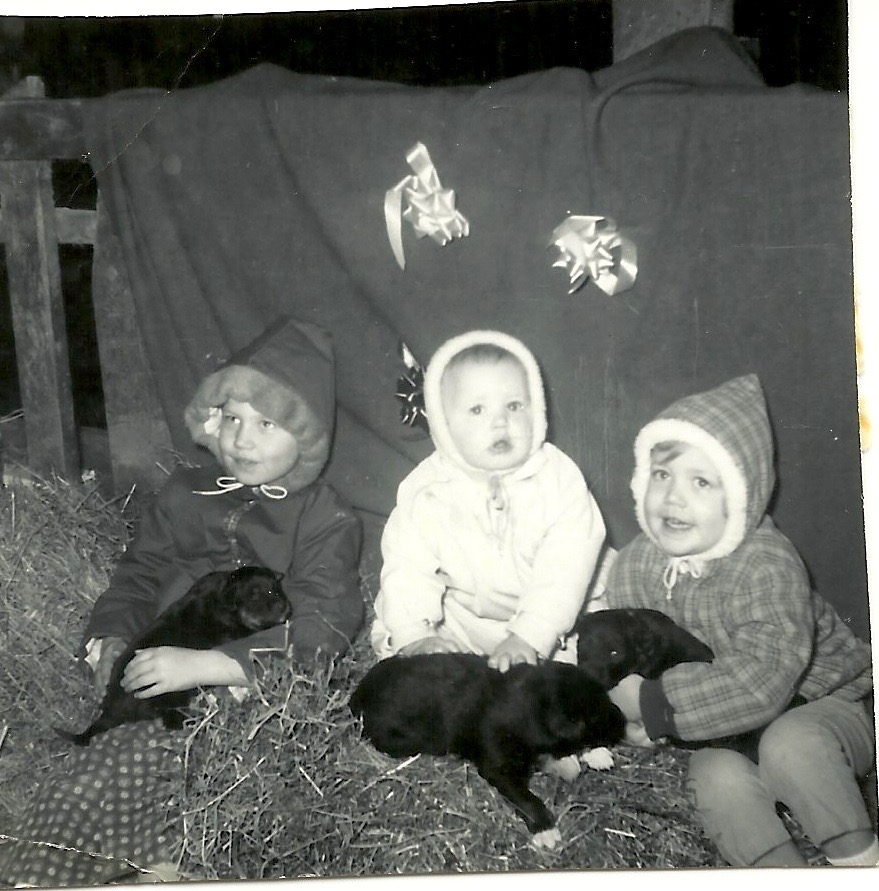 The dog I remember the most as a child is Pepper! Pepper was so white and fluffy and we spent time playing with her and keeping her hair coat brushed out. She became a mom and we loved having the puppies around. Nothing was more fun than having them chase you and want to snuggle with you. She was great with our cats even though they were not fond of her. She kept many salesmen from getting out of their cars since they thought she was a wolf. We never did anything to tell them otherwise. Salesmen had a tough time in those days as they stopped at farm after farm looking for a buyer of whatever they were peddling. It was not a job that was considered desirable. 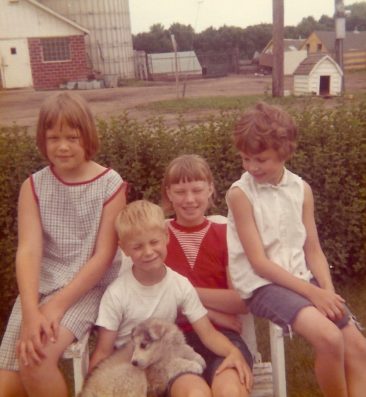 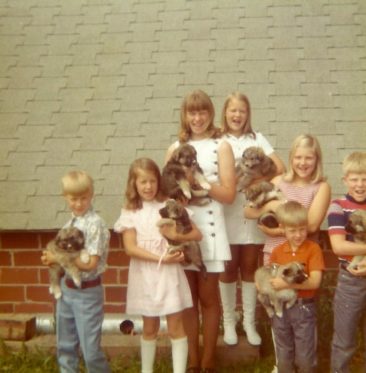 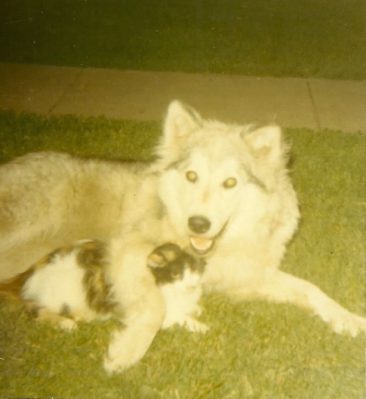 When I was a teenager we got Chico our German Shepherd and of course she had puppies and we kept Rex. They were fun dogs to have and I enjoyed their playful personalities. When I was a senior, my sister took my senior pictures at the farm and I had photos with Chico and Rex. They started running as Rex got older and eventually were poisoned because the farmer thought it was coon getting into his barn. The farmer called us the day he discovered it was our dogs and was so apologetic about what happened. My dad assured him that when dogs leave home bad things can happen. We did not keep them home so we were at fault for the outcome. I remembered that lesson very well. 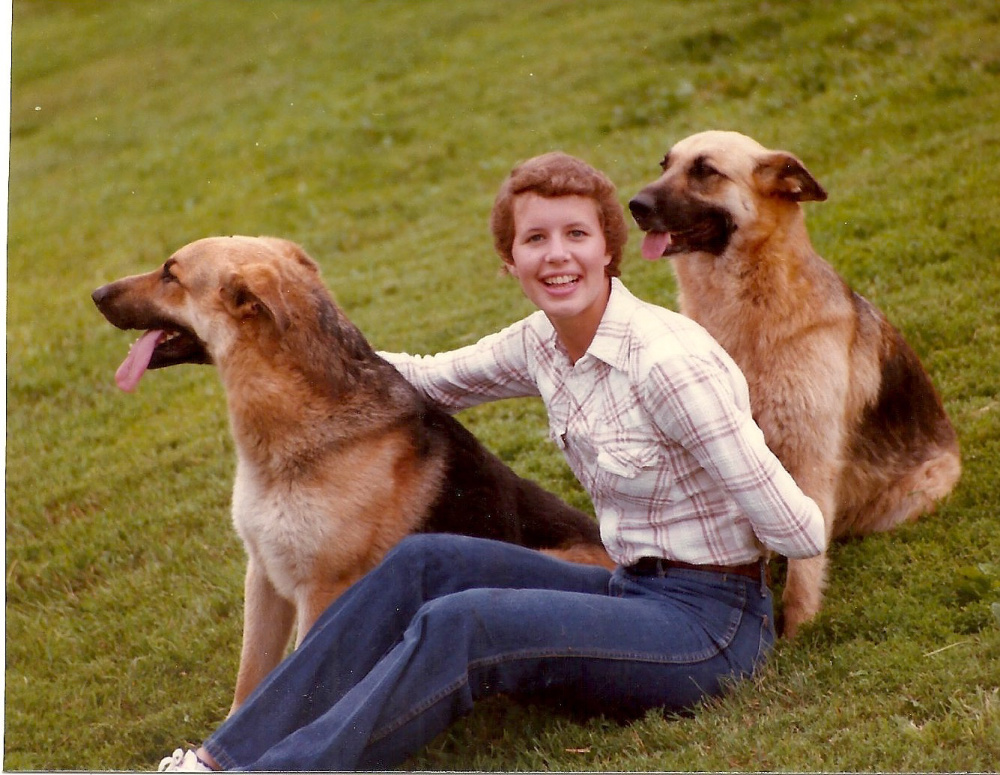 I went off to college and my parents got Blue Tick Heelers to help with the livestock. I was not around much during that time but remember how well they did their job of watching the gates to keep the hogs inside the fence while a tractor was going in and out.

In 1990 when my husband and I got our first home and before we had kids, a golden retriever breeder brought in a litter of puppies. A litter of puppies or kittens always makes my day. He indicated he had taken one of the pups to see a different vet because it was always dribbling urine. The vet had given him some antibiotics but nothing had changed. I examined the male pup and realized that he had no opening of the prepuce to allow the urine to exit. It was a genetic defect and without a major surgery there would be no way for him to pee normally. The man was not going to spend the money to fix the issue since it would cut into his profits. He was raising these puppies to help put his kid through college. He asked me what he should do. I suggested making him a donation to Minnesota’s College of Veterinary Medicine. They were not interested. He asked me if I wanted him. That is how I got COACH! 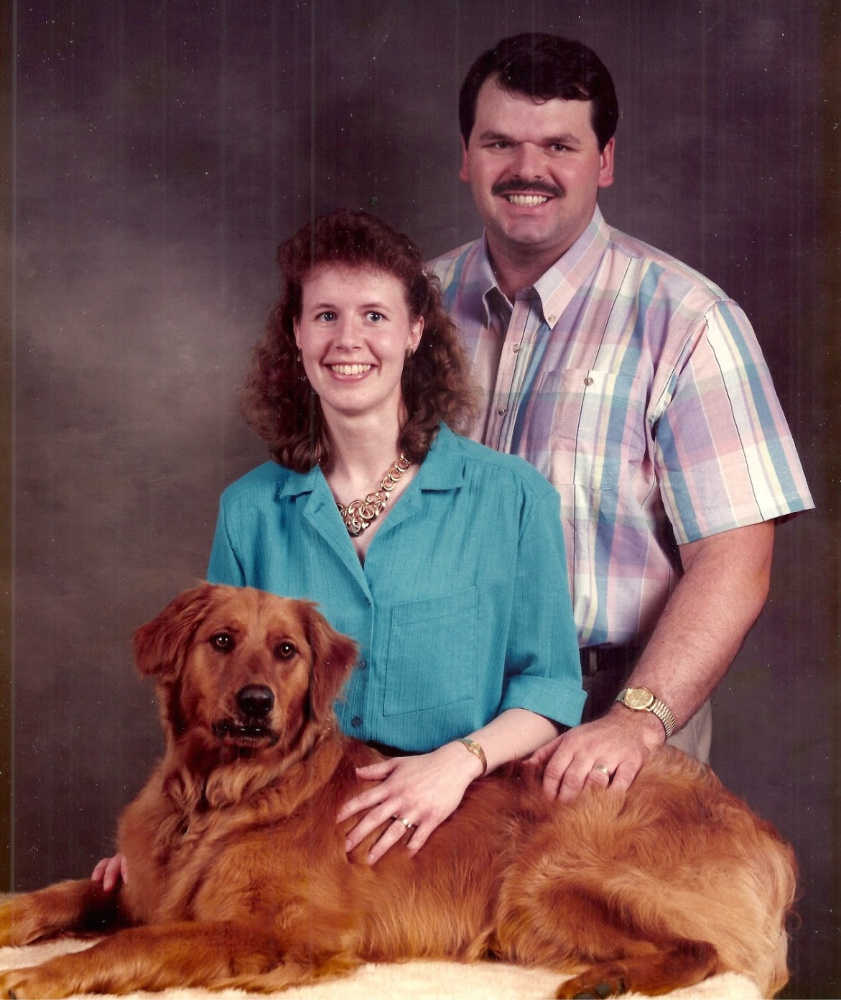 I did the surgery, which would be considered a sex change, by removing the prepuce and penis and opening up his urethra. He lived to be 12 years of age. He peed like a female and always was prone to bladder infections if he went swimming. He was our first child and was great with our 4 kids.  He got more love and affection over the years as each new child came into the home. He developed a hemangiosarcoma on his spleen and this photo was taken before we elected to have him put to sleep. This was one of the hardest things I did as a parent, sharing with my children why we had to make this tough decision. Why we did not want Coach to suffer in his final days. I have always felt that we cannot hide the painful things from children. If they are going to have pets and love pets, they will need to learn how to know when is the right time to let them go. With all the love we have to give and all the love we receive from our furry friends, learning to let them go when it is time so they can leave this earth in a peaceful manner is important.

After Coach crossed over the Rainbow Bridge, we decided to take a break from having another dog. We had 3 cats in the house and were busy with activities. We did not have the time to train a puppy.  In 2004 we moved into the country and the questions started coming, “When can we get a puppy?” I was staying at home. All 4 kids were now attending school. We had just moved to Winterset. It was time. 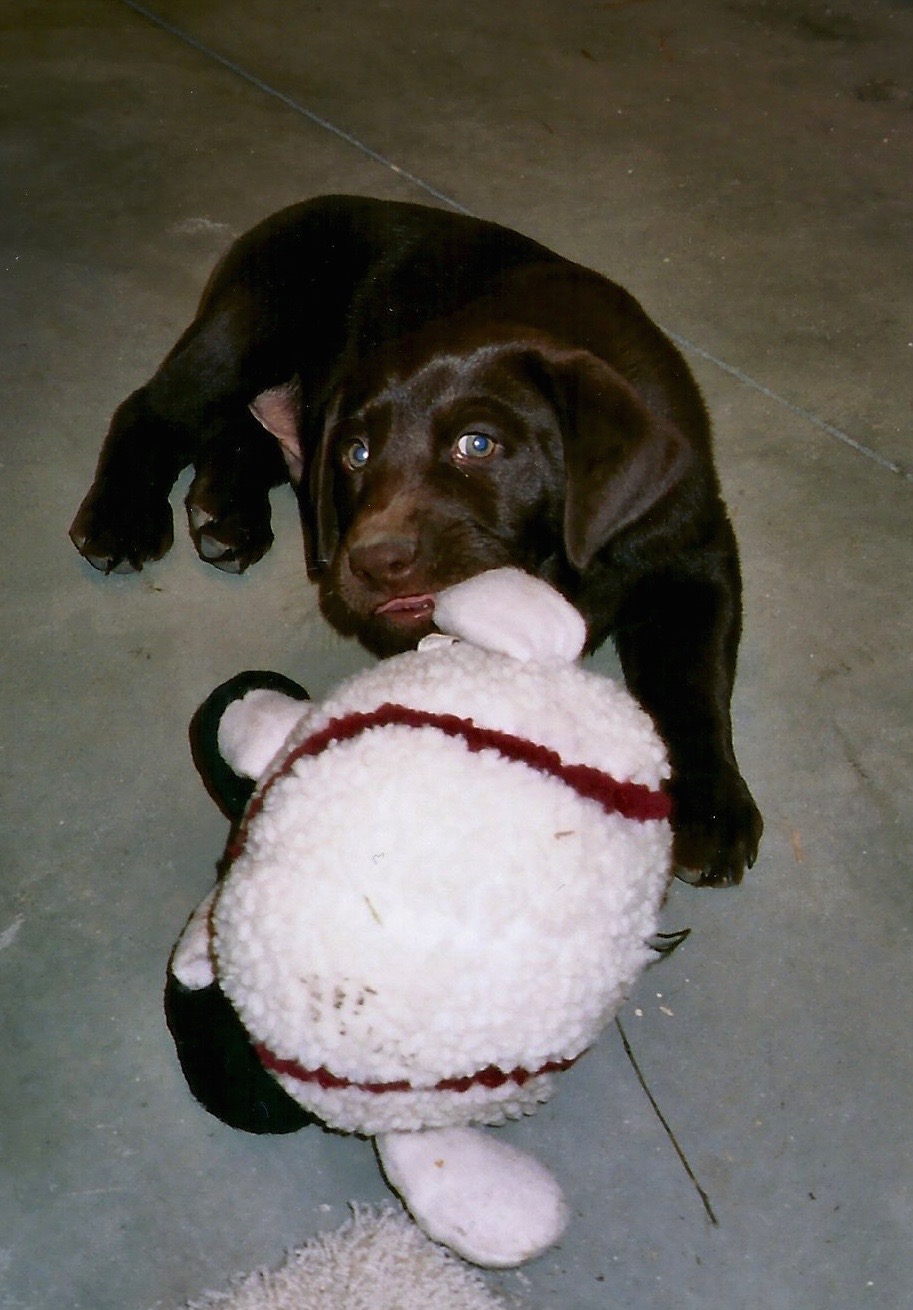 Bo came into our lives as a bounding 8 week old Chocolate Lab. He had acres to run on and 4 children to keep him entertained. He rode the 4-wheeler and the golf cart as a puppy but as he grew he found it more enjoyable to run along side. He loved our pond and would trot down there on hot summer days just to cool off. He kept all the deer away from my plants and the coyotes away from our outdoor cats. He loved everyone and was the perfect family dog. He went to dog classes with our daughters and learned manners. Loved nothing more than to hang out with whoever was around. I wish I could figure out how many miles he did in his lifetime. He never seemed to stop moving. While we mowed he felt the need to follow the mower back and forth. It took us over 5 hours to mow around the house on our riding mower. He made many trips to the pond on those days. We lost him in 2012 to uncontrollable seizures. It was a heart breaking situation since I could not stop the progression and saying good bye was the only way to bring him peace. Again we let Bo go to join Coach across the Rainbow Bridge. 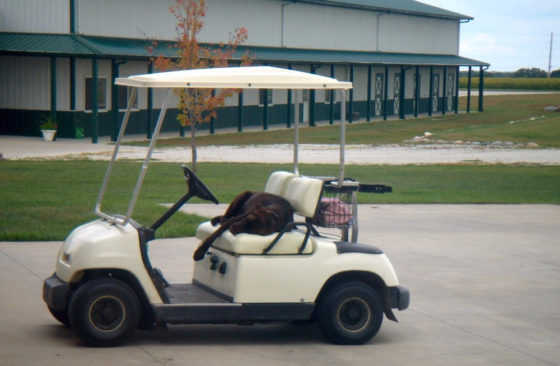 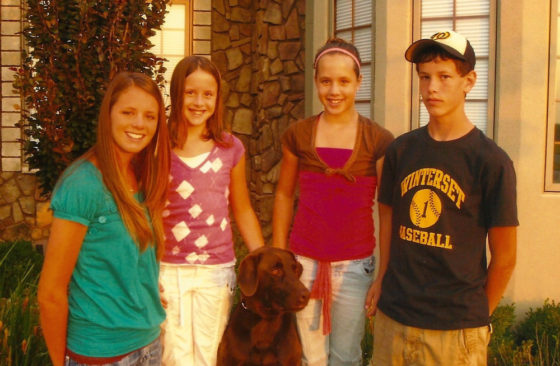 I had not intended to get another dog after Bo. The oldest two kids were in college, the younger two were teenagers involved with lots of activities. I was back working fulltime and the thought of training a puppy was overwhelming.  In 2013, we heard about 2 weimaraners running in Madison County. They were first spotted in the St. Charles area and as the week went on different people would call about them. Eventually they ended up at the Winterset Soccer fields. Winterset Veterinary Center was contacted since we hold the dogs running at large within the city limits until their owners can claim them. There was one abut 6 months of age and the other we guessed to be about 1 years of age. They both had orange hunting collars on and the older one was calm, quiet, and respectful. We contacted the ARL, we checked Craigs List, we put them on the Iowa lost pet website, and no one stepped forward to claim them. They had no chips or identification on them. That is how we got Bleu! 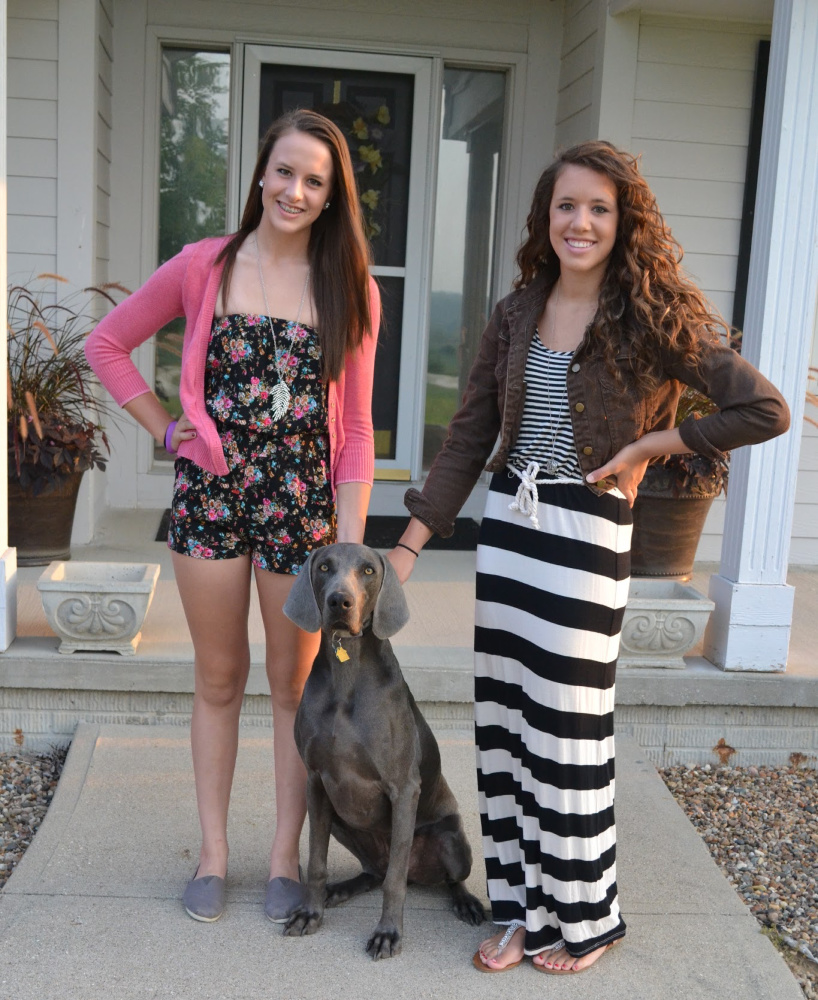 The ease of bringing Bleu into our lives was smooth. He trained extremely well.  Our youngest daughter took him to 4-H dog classes and won top honors in dog obedience at the county fair. She spent many hours working with him. Since she has gone off to college now he looks forward to each college break to be able to hang out with his bestie. 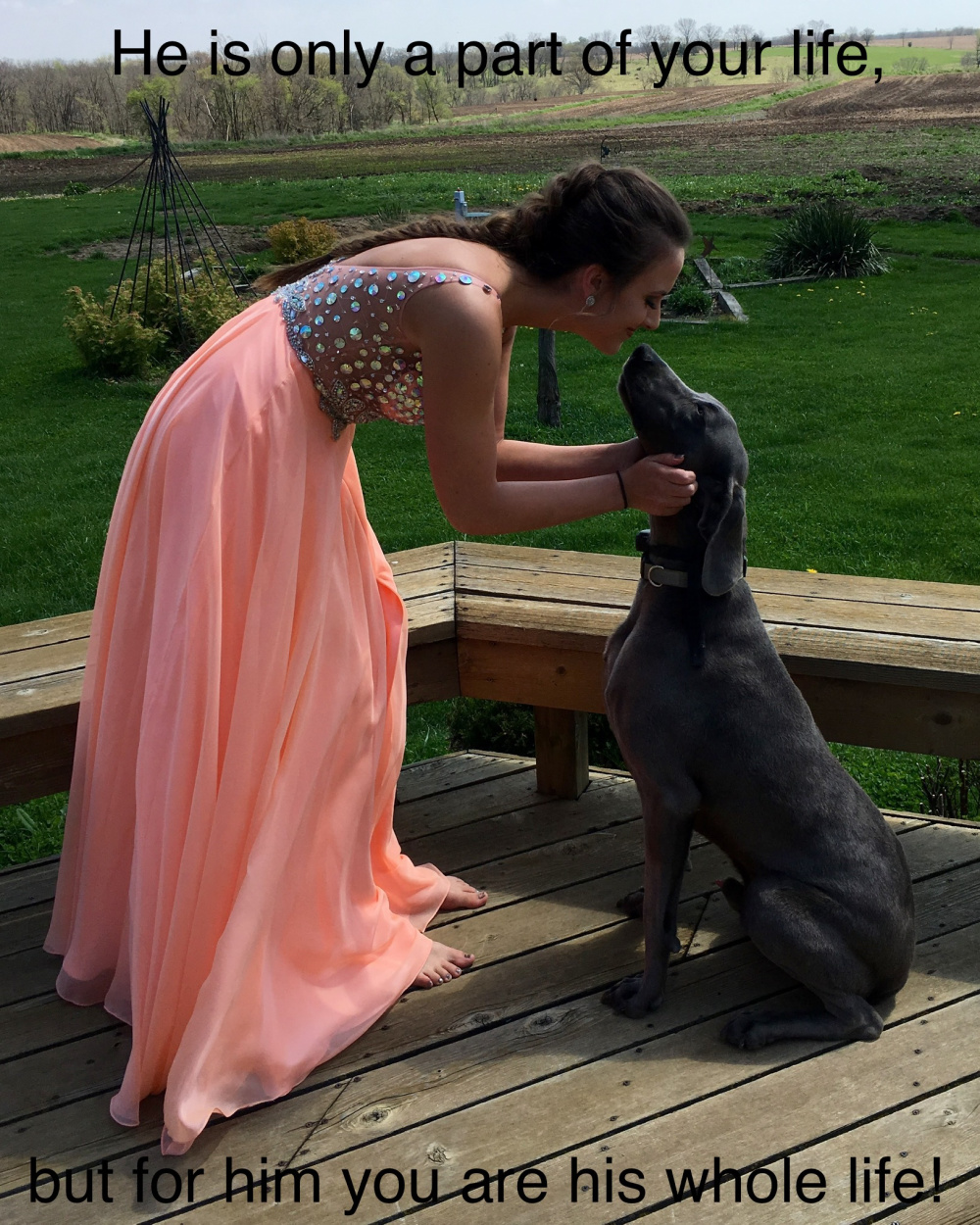 Bleu has become my walking partner during the warmer season and we have enjoyed visiting the new dog park east of town. He has traveled to visit our daughter on campus and gets the royal treatment every time. We went to the Covered Bridge Winery a few weeks ago and he was very interested in the Bernese Mountain Dogs. It is wonderful to know that he will be respectful in the public settings. I know that with all our dogs the day will come when the toughest decision will need to be made. Until that time we will continue to make memories and enjoy the companionship of our 4 legged friends.

Thanks for letting me take a walk down memory lane and share my dog stories of the past and present. They say people look like their dogs. What do you think? 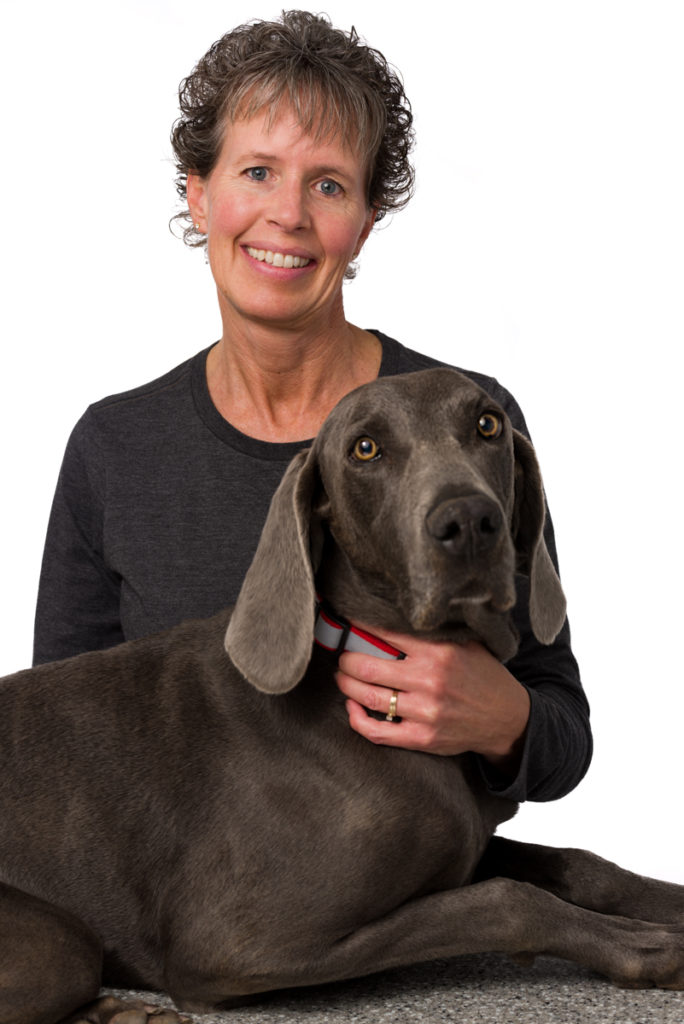