Often I am invited to schools to talk at Career Day about Veterinary Medicine. I enjoy the history and stories of the past before I launch into modern day medicine. I love to tell that the first veterinary school in the USA was Iowa State University, founded in 1878. It was a two year curriculum and was FREE. Now there are 29 vet schools, and a degree takes three to four years of undergrad, four years of grad school, and hundreds of thousands of dollars.

I present an old leather doctor’s bag that holds glass syringes and books from the 1800’s that only contain 30 pages of all known diseases and treatments, like “sprain or cough or spavin”. The treatments or remedies (germ killer or tonics) include turpentine, belladonna, sassafras, Cayenne pepper, alcohol (liberal amounts), cocaine, and opium. How times have changed! Remember that aspirin was invented in the 1920’s, and sulfa — the first antibiotic — in 1932, and penicillin in 1943. The first four “girls” graduated as veterinarians in 1915 in Chicago. Now, female veterinarians outnumber men since 2009.

Curiously, a company called Scarless Gall Remedy Products Co. of Winterset, Iowa, produced and sold a salve that reportedly healed saddle or collar galls without any scar on horses in the first years of the 1900’s. It gained notoriety as the first class action lawsuit of false claims ever tried in Iowa courts. They never payed out any claims, instead closed down and re-opened as “Starless” Gall Salve Co. 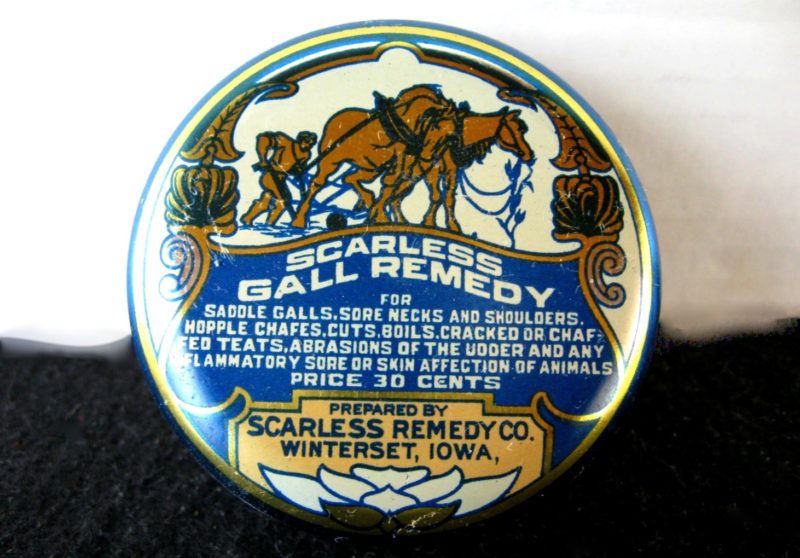 Human research — tried on animals — has yielded breakthrough protocols for human medicine, and then have been easily adapted back into vet medicine. Now, modern veterinary medicine has a huge list of vaccines, antibiotics, and chemotherapies.

Serum chemistry to analyze blood is done in-house. Digital radiology, ultrasound, EKG, endoscopy, acupuncture, laser therapy, and chiropractic are tools that veterinarians use. Board certified specialists are nearly as common as general practitioners.

My favorite invention was the cell phone. No longer was I stuck at home to take emergency calls. I actually could have a life and sit in the bleachers at my kids’ school events, or go to a friend’s house. Now the cell phone instantly tells me directions to the farm, accesses records and all internet formulas, shares pictures of cases, etc. I also really appreciate the RFID pet microchip. Its national database reunites scores of lost pets with their owners.

The future will hold even more inventions—sometimes hard to keep up with changing technology. I tell students on career day to study classes in STEM, reading comprehension, and computer ed. But the biggest asset for being a good or great veterinarian is the ability to listen and care. Can’t teach that, but it leads to a very satisfying career!