February is Dental Health Month for our fur babies. There are a great many things I could discuss in regards to this topic. For example, I could talk about all the reasons to brush your dog’s teeth. I could show you how bad your animal’s teeth can get when not cared for properly. Instead, I want to discuss the need for healthy items for our dogs to chew on.

There are so many choices available for our dogs to chew on. I receive many questions from clients about what is safe. So many times, someone calls requesting information about whether their dog might have a bone lodged somewhere.

I first want to say that this is one opinion in a host of many. Obviously, you are free to feed your dog anything and everything you want. I just want to share what I see on my side that may make you think twice before offering that item for chewing.

“Dogs ate bone in the wild before we domesticated them.” I wish I had a dollar for every time I have heard that statement. That might be the case, but I question how long those critters lived and whether they truly ate the bones. Seems to me often the bones are the only remains left when a carcass is found.

Chewing is an important activity for dogs. You must offer appropriate items for them to chew. You must observe them with that item before assuming it will be okay to leave them unattended with it. For instance, a chew toy can be destroyed and pieces can be swallowed and get lodged within the stomach or intestines. I know many have seen crazy things pass through their pet’s digestive tract, but it only takes one time when it gets stuck and you will wish that you would have followed these suggestions.

This photo shows one complication of dogs eating bones. This dog was licking marrow out of the center and locked the bone over the lower jaw and canine teeth. The owner discovered the issue and brought him to the clinic. The dog was calm but frustrated since he could not close his mouth. Obviously, he was unwilling to let me remove the bone while awake. We gave him a heavy sedative and after a few minutes we were able to rotate the bone and remove it. It was a positive outcome, but a lesson learned about the dangers of bones.

Calls also come in from worried pet parents indicating their dog is vomiting. We discuss any changes to the animal’s diet or recent meals. Often, the client responds that they had offered the dog a soup bone, a chicken bone, or a steak bone. They have seen the dog straining and so are concerned that something is stuck. With the history given, we have to explore the possibility of an obstruction so radiographs are ordered and sometimes a contrast substance like barium is given to see if an obstruction is present. We do not always find an issue with the bones, but we have to explore it to rule it out as a cause of the clinical signs being observed. If bones had never been given, we would not have that initial expense and could have looked for other causes.

If a dog is coughing and gagging at home and the owner indicates they gave their pet bones to chew on. Again, we must rule out an obstruction prior to exploring other causes of gagging and coughing.

One scenario is this: A dog stops eating and seems hesitant to let the owners look into its mouth. The owner assumes the dog has a bad tooth since its breath is bad as well. The pain is so great that we are unable to open the mouth without sedation. The owners indicate they do give the dog table scraps on occassion. Bones had been offered earlier that week but the dog was fine until today. With sedation in place we are able to open the mouth and find teeth with a large amount of tarter but no indication of a bad tooth. Upon further inspection behind the lower arcade of teeth a sharp bone shard is removed from a red and swollen commissure of the mouth. This was the cause of the smell and the resistance to eating.  It had nothing to do with the teeth.

Another scenario is: A middle aged dog present for routine care and during the exam the teeth are inspected. One side appears to have healthy gums but the teeth are worn down.  The other side has a large amount of tarter accumulations on both the upper and lower arcade. The gums are red and swollen indicating gingivitis is present. Discussion takes place that for some reason their dog is chewing only on one side of the mouth. I ask about what they offer for chewing besides the dog food. They indicate bones from the locker are one of his favorite treats. I point out that the worn teeth on both sides is caused from chewing on bones. I suspect the dog will have a slab fracture on the side with all the tarter accumulation and gingivitis. Fractured teeth and flattened worn teeth can be caused by chewing bones as well.

The bones are harder than the enamel on dogs’ teeth. As dogs chew continuously on these hard surfaces their teeth wear down to a flat surface. This exposes the pulp cavity of the tooth and cause damage to the tooth itself. Not to mention the cracks, chips, and fractures that are caused by chewing on bones, antlers, hooves, and or rocks. 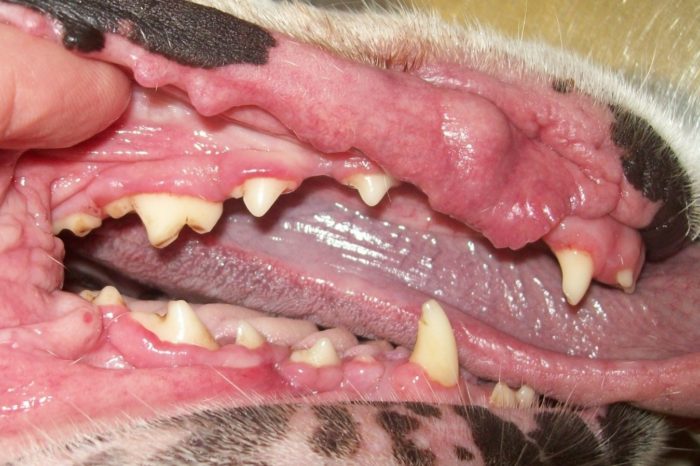 Years ago when our pets lived outside and we offered them all the leftovers from our table, we rarely thought about what complications might arise from some of those items. We saw those outdoor pets live a good life but not necessarily a long life. Today our goal is to help pets live a long and healthy life with as few issues as possible. My suggestion is to avoid bones and other hard surface items. There are numerous healthy items for dogs to chew that will not lead to other dental issues. Look for the seal of approval from the Veterinary Oral Health Council(VOHC) on toys and treats that have shown a reduction of tarter on your pet’s teeth. No bones about it, if you do not offer bones, antlers, or hooves, the concerns discussed above will not be an issue for your fur baby.