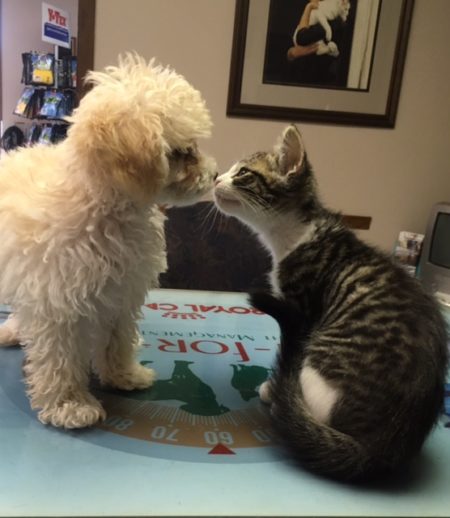 Why would we even consider doing such a major procedure on such a young pet? Women who have these procedures are not allowed to lift, drive, work, etc. for weeks after. Yet we are performing this procedure younger and younger for our pets. This movement began many years ago when shelters realized how few adopted pets returned for their spay or neuter at 6 months of age. This quote from the Fayette Humane Society really sums it up:

“An average cat has 1-8 kittens per litter and 2-3 litters per year. During her productive life, one female cat could have more than 100 kittens. A single pair of cats and their kittens can produce as many as 420,000 kittens in just 7 years.”

Those are staggering numbers. For this reason, shelters began spay and neuter procedures prior to adoption of puppies and kittens. What was discovered was there were no growth issues and the younger pets recovered much more quickly than the older patients from anesthesia as well as the surgery itself. Clients are often surprised how playful and happy these younger patients are after surgery. We have less complication with swelling and incision redness. With young puppies and kittens very few “cones of shame” are needed to keep them from licking at the incision.   Most clients report that their pet is back to normal activity within 2 days.

Now we come to one of the most important reasons to spay your pet in the first few months of its life, BREAST CANCER. Having your pet spayed before her first heat cycle will remove the risk of breast cancer. Clearly, that is a great reason to spay your pet. After 2-3 heat cycles, a female’s chances of breast cancer are just as great as a pet that has never been spayed. Doing the spay early removes almost 100% of the risk for this clinical condition. Breast cancer is aggressive and spreads to numerous glands and to other internal organs as well. When a partial or complete mastectomy is performed, the recovery is long and painful for our female pets. Even with this surgical procedure, there are high probabilities that the cancer will return or be found in other locations in the future. Why put our pets through this if it can be avoided?

BEHAVIORAL studies have shown that a spayed or neutered dog is 3 times less likely to bite or be aggressive to humans or other animals. Awareness of behavioral issues is becoming more common. People realize that a dog that attacks humans or other dogs is not normal. We recognize that this is dangerous and make attempts to reduce the pets fear and anxiety. We remind people that if you wait for your dog to show signs of aggression and then you spay or neuter the pet, this may not change the situation. The success stories come from doing the procedure before the behavioral issues have begun. Therefore highlighting the positives of an early spay or neuter program.

BEHAVIORAL issues of wandering also come into play with an intact female dog. When her cycle begins, she will be driven instinctively to find a partner as much as the male will be driven to find her. With the first stage of her cycle, which can last anywhere from 7-10 days, she will have a large amount of valvular swelling and a heavy blood discharge. During those early days each time she urinates or drops blood she is sending pheromones out to all intact males in and around the area. This is why you will see stray dogs wandering into your yard or loitering around your home when your female begins her cycle. After the heavy discharge ends is when she is ready to stand for her mate. She may be in her standing heat for 7-10 days as well, so be prepared to keep her on a short leash while outside and never leave her unattended during those days. The final 7-10 days she may have a lighter colored pink discharge and still be swollen but will not stand for a mate. The dogs cycle will last up to 21-30 days. This is important to remember since she is driven to be bred instinctively and it is your responsibility to make certain that does not happen. They usually will cycle twice per year.

BEHAVIORAL issues for the feline are different. Cats are what we call induced ovulators. When bred, ovulation is triggered, without being bred the female cat can wax and wane in her cycle and cause a large amount of frustration to owners and other pets in the home. The female cat in heat is agitated and vocal and often attempts to get outdoors. This can last for days and cause the entire household to be at odds about what should be done. Female cats can have repeated heat cycles stimulated by daylight, warmer temperatures, and the presence of other intact cats. Spaying her before any of this begins can prevent frustration for every person and pet involved. Some cats will cycle as early as 5-6 months. Spay early and avoid the hassle!

Another huge health risk to our female intact pets is PYOMETRA. This condition is difficult to detect since many describe their pet as just not acting right. Maybe eating less, drinking more, laying around more, there may be a discharge but not always, some very vague symptoms. Most owners report that her heat cycle has been irregular and cannot remember the last time she cycled. When checking blood work, we see a very elevated white blood cell count that gives us concern for a possible pyometra. The photos below show an older dog with a normal uterus on the left and the one on the right is the same aged dog but with a uterus full of pus. These cases can have a uterus full of pus as large as a pregnant dog’s uterus. Of course, the infected uterus must be removed and the patients are already debilitated so the procedure is risky. Spaying your female pet can avoid this situation 100%. 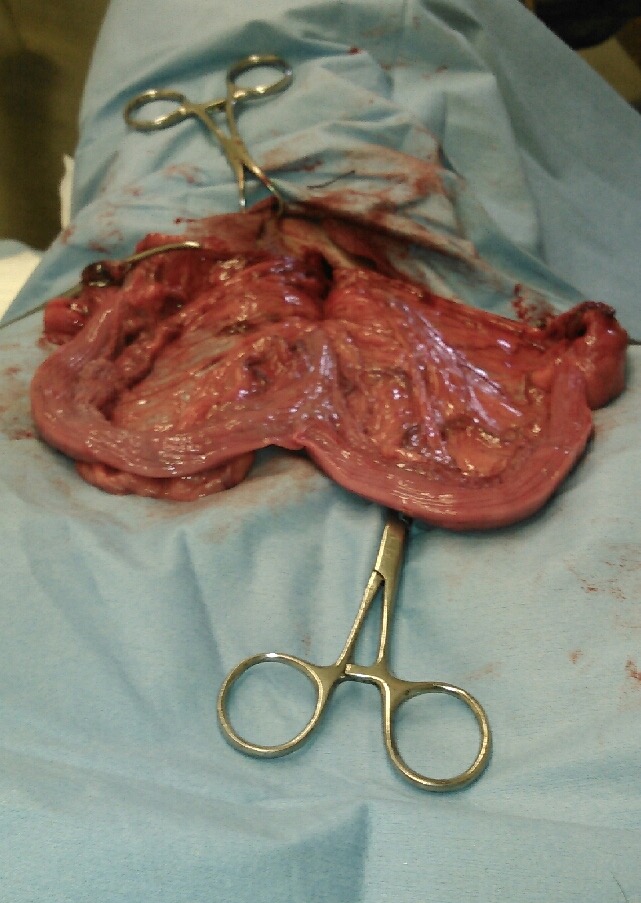 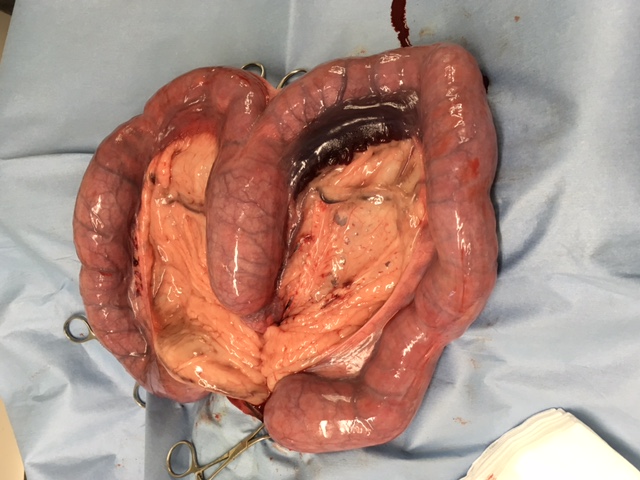 Some common myths that we hear often when discussing a spay procedure are:

“I do not want my pet to get fat and lazy.” As with any pet, if feeding the appropriate calorie intake based on their daily needs you can control their weight. The trouble is many want to continue to free feed their young adult pet which leads to weight gain. Also, the age we used to spay a pet was around the time they were maturing and so activity levels were naturally dropping but we continued to feed them at the same level as when they were a growing puppy. We need to adjust their intake based on weather and schedules to avoid them gaining weight in the winter when no one wants to walk their dog and when school begins and we no longer have time to walk. Your dog will still want to protect its family and territory even after being spayed. Any behavioral changes noted after a spay are more likely caused by something other than the spay.

So, what are the disadvantages to a spay? As with any surgical procedure the risk of anesthesia is something we can never underestimate. Pediatric pets are sensitive to heat loss and blood loss so those factors must always be considered at the time of surgery and postoperatively. Your pet will never have a litter of kittens or puppies. That can be considered a disadvantage by some but I see it as a positive advantage. Are there increased health risks with age associated with early spay and neuter programs? Recent studies have indicated with some breeds of dogs they are seeing a higher incidence of osteosarcoma or hemangiosarcoma in altered dogs. I believe more studies are needed to verify these results since most pets we treat are altered so does this give a fair representation of the case studies. Where the study was done, how did they account for diet and environmental variations? Did they make certain that these dogs were not related since the study was done in Golden Retrievers? With all the research that is happening in humans studying our DNA and finding early links to different diseases, I believe this will help us learn more about the how’s and why’s of cancer in pets. So, the jury is still out, but I can definitely say that there are many great reasons to consider a spay for your pet to make them more family orientated and help avoid unnecessary pain and frustration for your pet and yourself.