“The Gentle Doctor…reflects concern, affection, love, and the significance of life for all of God’s creatures—-great and small. The memory of Christian Petersen will live forever in the minds of the veterinary profession.”

In 1988, when I graduated from Iowa State University College of Veterinary Medicine, I decided to purchase a Gentle Doctor Statue for myself. We were poor college students but as a young teen, my parents made a pack with each of their children that if they did not smoke by the time they were 25 years of age, they would give us each $250. Today that would not seem like much money, but as a teenager and a poor married college student, it was a BIG gift. Imagine how much money I have saved by not smoking, and I do have a treasured statue to commemorate my DVM degree and that pack with my parents.

When I decided to use the money for a statue, I did not want a bronze one. I had collected pewter pieces for years and wondered how difficult it would be to get one made out of pewter. I contacted the company that made the molds and was told to get permission from Iowa State College of Veterinary Medicine for a mold to be made for a pewter cast. I would pay for the mold to be made and it would then belong to me and I would be able to make additional statues with permission from the College of Veterinary Medicine in the future.   I followed through on all of these steps and did obtain a statue made from pewter with my name engraved on the base. 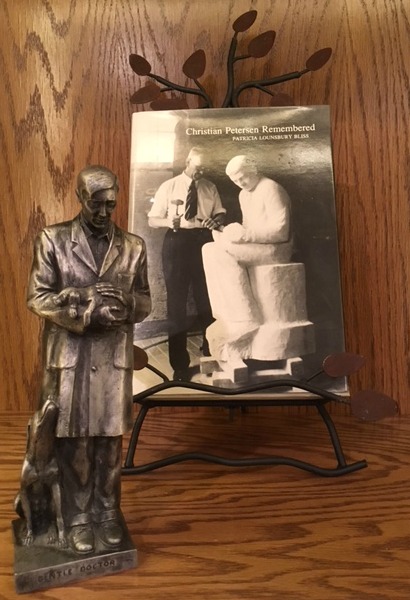 A few years after graduation my father called and asked if another statue could be made from pewter for a long time veterinarian named Dr. Forland. He had practiced in the area where my parents lived and when told about my statue, he was interested in having one made with his name engraved in the base as well.   I again requested permission from ISU College of Veterinary Medicine and with the help of my parents had it delivered to Dr. Forland. I never spoke face to face with him and do not know if as a young girl I ever met him but felt glad I could help him get a statue that he could have his name engraved on the base.

Fast forward a few years and I was sorting through items and ran across a letter I had been sent from Dr. Forland after he received his statue. This letter was written 4 months before his death I was later told and obviously I had felt it worthy of saving since it was a hand-written letter and these are treasures to behold. The words he wrote shared a side of himself that he indicated he had never spoken of. I had decided I would hang on to the letter and if ever I could find one of his children, I felt they should have the letter.   And to my dismay, GUESS WHAT……18 years after the letter was written my parents happened to meet Dr. Forland’s daughter in a random place. After talking with her for a few minutes, and telling her the story of the statue that I had cast for him out of pewter, she went to her car and came back with 2 books titled “Christian Petersen Remembered”, the man who is responsible for the Gentle Doctor statue. Her father had purchased a large quantity of these books and she had decided to pass them out to people she met that had a connection with her father. One book was for my parents and the other book for me.

My parents called me to tell me about their encounter and I immediately asked if they got her phone number or address. My mother said yes, since his daughter was hoping that someday she could meet me. I requested the information and then sent her the original letter so she could read the written words for the first time, 18 years after her father’s death.

So why is all of this worthy of a blog……well let me share with you the letter contents and then you can see how important is was for me to return this letter to the family.

Vallie met your dad at Fallgatters the other day so she obtained your married name and address. Please accept my apology for not getting in touch with you before for your kind consideration in allowing us to have the use of your mold for the Gentle Doctor Statue. Thank you!!! It is especially nice that an inscription can be permanently etched at the base. We will have one for each of our children.

Never in my wildest dreams did I think when I was modeling that it would become such an icon for ISU and world wide.

It was ironic that it was crafted in the Home Economics building (McKay Hall) at a time when there were no women students taking Vet Med! The college couldn’t find any other place for Petersen to work and teach. Of course he wasn’t too welcome because of the mess and smell of wet plaster, clay, etc. (It was my job to keep things clean)

One day I asked him if the pile of clay he was working on would have any redeeming value in the future. His answer was,” Young man, if you live another 50 years you may be glad you have given me some of your time.”

Jan 11, 1986, I had a massive heart attack with a lot of damage. Had bypass at Mayo. In June I had recovered enough so I got a release from my cardiologist to attend 45th class reunion. I had lost 50 lbs and was allergic to almost all medications.

Our class took a bus tour of campus, with special point of interest “the old vet quadrangle” (it has been remodeled for classrooms). The Prof that was hosting the group was telling the story of the old building and where Bas Relief & Statue location was before it was moved to the new location. One of my classmates knew of my involvement and posed the question, “Does anyone know who Christian Petersen’s model was for it?” When it was known it was me, the Prof came with his microphone for the story.

I just fell apart emotionally and could not speak! (Embarassing) In my mind, I must have seen and heard Petersen telling me what I could expect if I lived another 50 years. It was within a month of 50 years.

God spared me some more time so that I could be around to see what it has meant for ISU and the world!! I was honored this last Homecoming in the unveiling at Rededication Ceremony.

Excuse all this talk about the above experience. I haven’t told anyone about this before.

You see in 1936-37, Dr. Forland, as a poor undergraduate student cleaning up the messes of Christian Petersen had modeled for him holding only a small pillow on his forearm in a position similar to a puppy. He later applied and was accepted to the Veterinary College and graduated in 1941. This humble man realized years later what his small contribution means to the world of Veterinary Medicine. This statue is held in high esteem within the heart and mind of every veterinarian that graduates because it represents the bond each of us shares with our patients.

This month I got to meet Dr. Forland’s daughter and she again thanked me for the hand written letter. One of her siblings has the pewter Gentle Doctor Statue with Dr. Forland’s name engraved on the base. Never did I realize that a mold made to commemorate my DVM graduation would also touch the heart of a man who was a model for the Gentle Doctor Statue back in 1936. I find it interesting how small gestures of kindness can come back and bless your life in ways you would never imagine. Dr. Forland never was paid for his time as a model and yet he found great joy and gratitude 50 years later when he was recognized for his small part in this world wide icon the “Gentle Doctor Statue.” And as they say…. the rest is history.